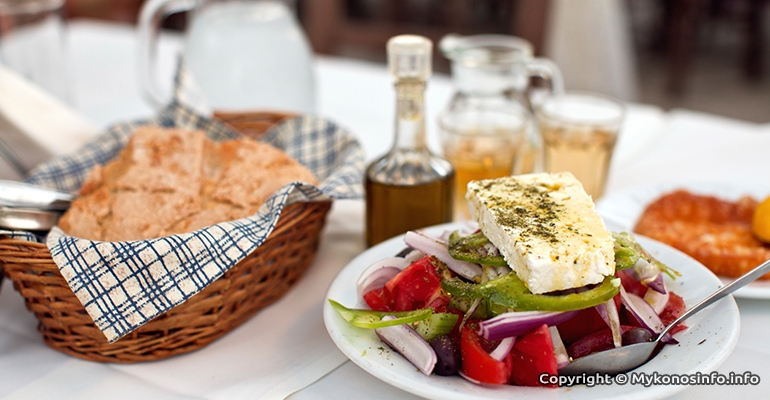 Mykonos despite the fact that it has developed into a leading tourist destination, it has not adopted the international cuisine but keeps local and traditional dishes.

Amigdalota - Almond
Almonds are found throughout the Aegean, but are not the same everywhere. Those are baked ones. Essentially they are candies with crushed almonds. Their shape is oblong, it has a strong aroma and coated with sugar.
Kopanisti
Kopanisti produced in Syros, Tinos and Mykonos. This is a soft cheese with pungent taste. For its preparation they mainly use raw milk and kept in clay or glass jar. It drain into "Tsantila", a thinly woven cloth, and then becomes "tyrovolia" (soft cheese, which is used in pies).
Xinotyro
Xinotyro is a kind of small cheese which is produced from the straining. Used both as a table cheese and grated.
The sausages of Mykonos
The Myconian sausage is made exclusively from meat and pork fat. It is very popular sausage and is mostly manufactured at Christmas. They are sun-dried and baked in salt and not in tobacco. Contains savory and oregano.
Louza
The Louza is tidbit of pure meat and comes from the same place where we take the steak. Salted and fermented with pepper, allspice, savory, oregano. After they put it in "eyes" (pig intestine). They keep for a year in the refrigerator, after being cut, they place it in the freezer. It is served into thin slices.
Mostra
Mostra is a quick and filling Mykonian snack. Consists of barley rusk, kopanisti, tomato, olive oil, oregano and salt.
Kollisianoi
They gather the sea “anemones” carefully, put them in batter and fry them.
Gingerbread
It is great and "sweet tart", which is made with "ravolia", honey and cinnamon.
Provasia or "thalassogampros"
It is a tasty grass of Mykonian cuisine cooked with meat and lard.
Fried crones
It’s a kind of pancake served with sugar, cinnamon and honey. A simple dessert, which is made from the dough left over from pies.